Rate Spike is Better and Worse Than You've Been Told

Volatility is back with a vengeance since the election--especially for rates. Just when it looked like things might be calming down, this week's Fed Announcement resulted in a spike to the highest levels in well over 2 years. As various news outlets rush to cover the story, some have overplayed the drama while others fell short of relaying the true severity of the move.

The downside of Freddie's data is that it can't keep up with faster changes.  Numbers released on Thursday generally capture rate movement that occurs on Monday and Tuesday.  That can cause big discrepancies between news and reality on weeks where rates make big moves on Wednesday or later.

Remember, markets are always trying to make today's trading reflect future realities.  The updated Fed outlook caused a quick reassessment of those realities.  The Fed let us know it sees an extra hike in the year ahead, so financial markets adjusted accordingly, as can be seen in the following chart of 10yr Treasury yields (a good proxy for momentum in longer-term rates like mortgages). 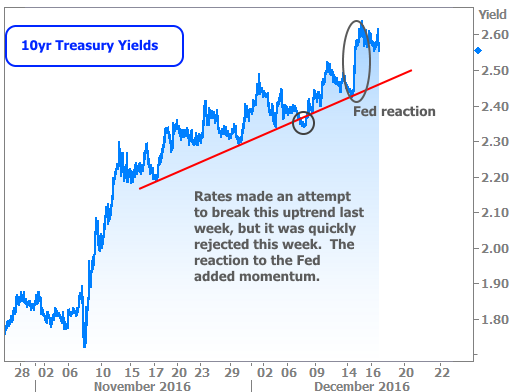 The net effect was roughly 0.125% for 30yr fixed mortgage rates that did NOT make it into Freddie's numbers.  Here's how they stack up compared to the average lender rate sheets:

Whereas news outlets under-reported this week's mortgage rate spike, they're certainly not making the same mistake when it comes to the big picture rate outlook.  Headlines abound proclaiming the 'death of the decades-long trend toward lower rates.'  If you took them at face value, you'd be left with the impression that rates have been falling for 35 years and are now destined to rise indefinitely.

Here too, you might want to take the mass media spin with a grain of salt.  First off, it's not really possible to confirm that a market trend of 35 years has fundamentally changed in just over 35 days.  No doubt the current rate spike is one of the biggest in history, but that happens from time to time.  While this week's volatility does bring rates closer to breaking out of the trend seen in the chart below, you can decide for yourself if it looks any scarier than a few past examples ('88, '93, and '98 especially). 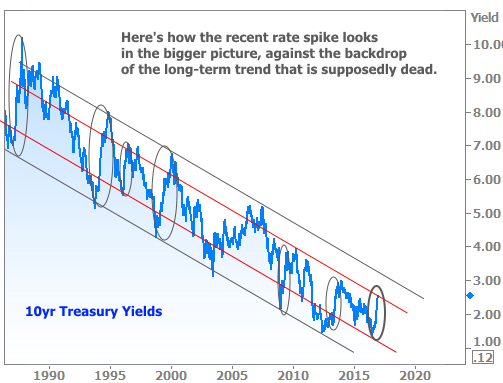 All that having been said, it wouldn't make sense to argue that this linear trend will continue forever.  It won't and it can't.   Bond yields (aka "rates"), aren't like stock prices.  They exist in a range.  While we may have to periodically adjust our concept of what a normal range might be (thanks to things like negative rates in some countries), rates will never be operating under the assumption that they can move lower indefinitely.

The takeaway here is that the death of the decades-long trend in the chart above is to be expected.  That's the important point missing from most analysis on the topic.  Smarter analysis suggests it's a better use of our time to consider what the new range might be as we asymptotically settle in to "the new normal" for rates.

If all this talk of rate volatility has you down, just make friends with homebuilders.  Apparently they're nearly as optimistic now as they were at the apex of the housing bubble.  November's increase in Builder confidence matched its fastest pace in 25 years! 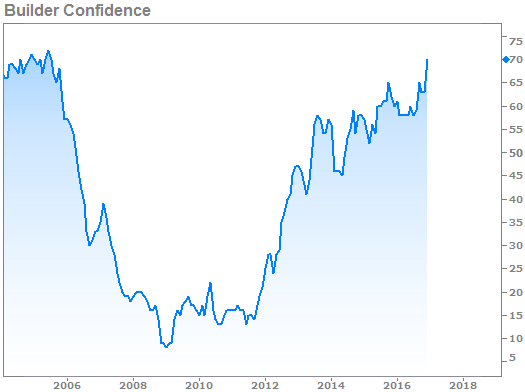