What's Really Keeping The Mortgage Market up at Night?

Interest rates surged to 2-year highs this week, apparently in response to Wednesday's news that OPEC countries struck a deal to limit oil production. True, if OPEC is willing to do what it takes to push fuel prices higher, it only adds to the inflationary fears already pushing rates higher. But even as OPEC dominated this week's headlines, there are more important things keeping housing and mortgage markets up at night.

Financial markets are understandably very interested in the stuff that fuels the movement of goods around the world.  The massive drop in oil prices at the end of 2014 saw the healthy interest grow into an obsession, with far too many market movements being forced to fit the oil price narrative.  It's a seductive thesis, especially for interest rates, given oil's inflation implications.

Oil prices do indeed have strong correlations with interest rate movements.  This week was a good example of that, as we'll see in the following chart.  But the chart also shows that this week's correlation is a small drop in a much bigger bucket. 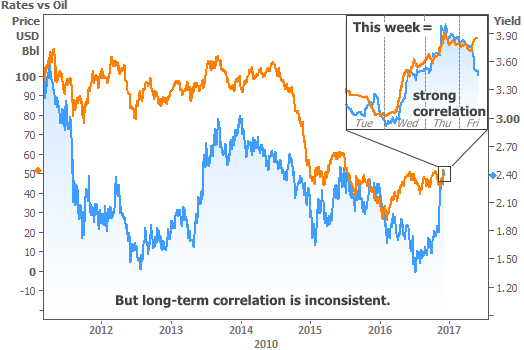 Rates are obviously taking cues from much more than oil prices.  Even within the confines of this week, it would be a mistake to chalk all of the rate volatility up to OPEC.  Thursday's news regarding the European Central Bank (ECB) is actually responsible for the second half of this week's rate spike.

The ECB previously said it would address the topic of its asset purchases (a key driver of generally low rates around the world) at next week's scheduled announcement.  Markets are worried that some form of "tapering" is in the cards.  When major central banks taper asset purchases, rates move abruptly higher (as they did during the mid-2013 'taper tantrum').  ECB tapering fears are already responsible for much of the push toward higher rates in 2016.

This week's news was essentially an off-the-record exclusive from an ECB official.  It spelled out the various options that the ECB is considering for next week's announcement, and all of them allude to tapering in one form or another.  Granted, this isn't too much of a surprise for financial markets at this point, but the confirmation of an imminent announcement was enough to add to this week's momentum, thus resulting in the highest rates in more than 2 years.

Beyond oil and the ECB, housing and mortgage markets still have a lot on their minds.  Tremendous uncertainty remains over the changes that might be made under the Trump administration--both general and specific.  Just this week, one of the first public comments from Trump's designated Treasury Secretary, Steven Mnuchin, focused on the need to end the Fannie and Freddie Conservatorship.

Away from the hypothetical effects brought on by policy changes, actual change is afoot!  Just over a week after Fannie and Freddie raised conforming loan limits for 2017, FHA is out with a similar announcement.

Unsurprisingly, the surge in rates continues doing damage to refi applications, as the Mortgage Bankers Association reported this week.  The news was offset to some extent by a stable reading in purchase applications as well as Pending Home Sales.

Perhaps the most sensational housing-specific news of the week came from Freddie Mac.  Actually, it was mostly an issue of wording.  In its Housing and Economic Outlook, Freddie's economists said that "mortgage originations will get crushed" by rising rates.  Bold words, to be sure, but are they justified?

First of all, there's no way to know exactly how the path of interest rates will unfold in the coming year.  Rates could continue higher and, of course, that would continue to have a negative effect on mortgage originations.

But here's an important caveat to the "crushed" comments: history is definitely not on Freddie's side when it comes to "mortgage originations" overall.  At best, one could argue that "refi originations" will decline, but even then, the environment is not as susceptible to crushing as 2013's.  In 2013 we were in the throes of a full-fledged refi boom when the taper tantrum sent rates skyrocketing higher.

This time around, rates never got low enough to spark massive refi demand--especially those originated during the all-time low rates of late 2012 through early 2013.  The following chart makes this obvious and also highlights the even more muted effects on purchases. 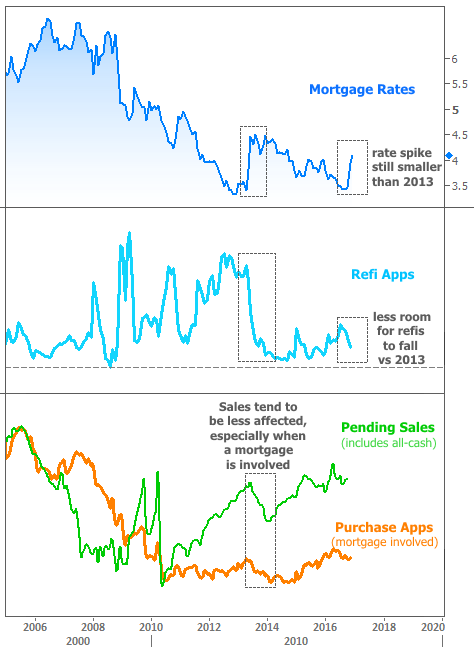 Bottom line: Yes, things are scary, especially if rates rise more than they did in 2013, but not nearly scary enough to conclude that originations will be "crushed" just yet.